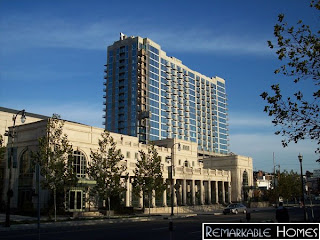 I suppose I knew it was inevitable, but somehow it still hurts. Developer Tony Giarratana has announced deep discounts on their remaining condos in the Encore.

“…Tony Giarratana and partner Novare Group plan to offer deep discounts on units in their Encore condominium high-rise on Demonbreun Street. The two have slashed prices by $30,000 on some one-bedroom units in the building and $50,000 on some two-bedroom units. (…) The program officially runs through the end of the year. But with condo sales down sharply, Giarratana said in an interview last week that extending it into 2009 is not out of the question.”

The next crucial question is: what will happen with the outstanding buyers who have held out by delaying closing for more than 6 month? I suppose this answer will be forthcoming in the coming months, but I am guessing that the developers will have to cave to market pressures and reduce prices for these folks.

Going forward? I don’t know about you, but I am in the “wait and see” mode. Why? Let me quote the old adage, “Fool me once, shame on you. Fool me twice, shame on me.” The deals and steals are coming in 2009.