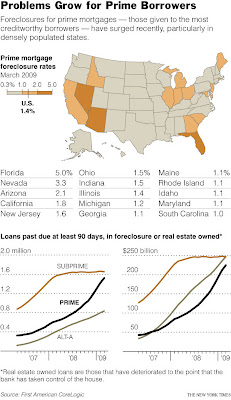 This article entitled “Job Losses Push Safer Mortgages to Foreclosure” appeared in the NY Times on May the 25th, 2009. The authors are Peter Goodman and Jack Healy:

As job losses rise, growing numbers of American homeowners with once solid credit are falling behind on their mortgages, amplifying a wave of foreclosures.

In the latest phase of the nation’s real estate disaster, the locus of trouble has shifted from subprime loans – those extended to home buyers with troubled credit – to the far more numerous prime loans issued to those with decent financial histories.

With many economists anticipating that the unemployment rate will rise into the double digits from its current 8.9 percent, foreclosures are expected to accelerate. That could exacerbate bank losses, adding pressure to the financial system and the broader economy.”

We’re about to have a big problem,” said Morris A. Davis, a real estate expert at the University of Wisconsin. “Foreclosures were bad last year? It’s going to get worse.”

Economists refer to the current surge of foreclosures as the third wave, distinct from the initial spike when speculators gave up property because of plunging real estate prices, and the secondary shock, when borrowers’ introductory interest rates expired and were reset higher.

“We’re right in the middle of this third wave, and it’s intensifying,” said Mark Zandi, chief economist at Moody’s Economy.com. “That loss of jobs and loss of overtime hours and being forced from a full-time to part-time job is resulting in defaults. They’re coast to coast.”

Those sliding into foreclosure today are more likely to be modest borrowers whose loans fit their income than the consumers of exotically lenient mortgages that formerly typified the crisis.

Economy.com expects that 60 percent of the mortgage defaults this year will be set off primarily by unemployment, up from 29 percent last year.

From November to February, the number of prime mortgages that were delinquent at least 90 days, were in foreclosure or had deteriorated to the point that the lender took possession of the home increased more than 473,000, exceeding 1.5 million, according to a New York Times analysis of data provided by First American CoreLogic, a real estate research group. Those loans totaled more than $224 billion.

During the same period, subprime mortgages in those three categories increased by fewer than 14,000, reaching 1.65 million. The number of similarly troubled Alt-A loans – those given to people with slightly tainted credit – rose 159,000, to 836,000.

Over all, more than four million loans worth $717 billion were in the three distressed categories in February, a jump of more than 60 percent in dollar terms compared with a year earlier.

Under a program announced in February by the Obama administration, the government is to spend $75 billion on incentives for mortgage servicing companies that reduce payments for troubled homeowners. The Treasury Department says the program will spare as many as four million homeowners from foreclosure.

But three months after the program was announced, a Treasury spokeswoman, Jenni Engebretsen, estimated the number of loans that have been modified at “more than 10,000 but fewer than 55,000.”

In the first two months of the year alone, another 313,000 mortgages landed in foreclosure or became delinquent at least 90 days, according to First American CoreLogic.

Each foreclosure costs lenders $50,000, according to data cited in a 2006 study by the Federal Reserve Bank of Chicago, so an additional two million foreclosures could mean $100 billion in lender losses.

The government’s recent stress tests of banks concluded that the nation’s 19 largest could be forced to write off as much as a fresh $600 billion by the end of 2010, bringing their total losses to $1 trillion. The Federal Reserve concluded that these banks needed to raise another $75 billion.

Many economists pronounce that assessment reasonable, while cautioning that it could become inadequate if foreclosures continue to accelerate.

“The margin for error is not that big,” said Brian Bethune, chief United States financial economist for HIS Global Insight. “It’s kind of like, ‘Let’s keep our fingers crossed that we’ve seen the worst.’ ”

Among prime borrowers, foreclosure rates have been growing fastest in states with particularly high unemployment. In California, for example, the unemployment rate rose to 11.2 percent from 6.4 percent for the year that ended in March, while the foreclosure rate for prime mortgages nearly tripled, reaching 1.81 percent.

Even states seemingly removed from the real estate bubble are seeing foreclosures accelerate as the recession grinds on.

In Minnesota, three of every five people seeking foreclosure counseling now have a prime loan, according to the nonprofit Minnesota Home Ownership Center.