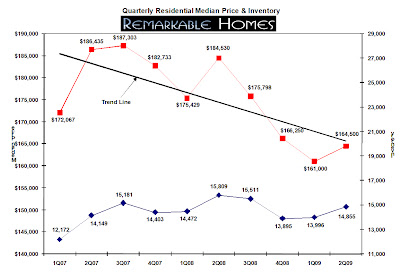 The graph shows a median price analysis compared to the average inventory held for the Nashville single family home market since the first quarter of 2007 through the second quarter of 2009. This is market information that I have collected using the official home sales numbers from GNAR and are deemed to be accurate.

This quarterly home median price and inventory analysis clearly shows a more severe price decline over the past 2 years than I would have thought. The market for single family homes has felt stronger than its condo counterpart, but the numbers simply do not bear that feeling. The trend line shows a net effective price drop of an unexpected 10 percent while the inventory trend line shows a net effective rise of 22 percent.

What does this home price analysis show? It undoubtedly proves that the Nashville single family home market has not been holding up as well as we had thought. Inventory levels rising by more than a fifth exacerbated by prices falling by a tenth lead me to believe that we may have a ways to go before price stabilization. Although, looking at the graph itself, 2009 home prices appear to be making a recovery after a two year low. The same is not true for inventory levels in 2009 as they have risen 6.5 percent since January 1st.

The good news: The Nashville Business Journal reports that Nashville building permits are down approximately 47 percent compared to just 1 year ago. During this same period Nashville ranks as the 22nd fastest growing city out of the 100 largest US cities. This leads one to believe that the area’s population growth coupled with less new construction will speed the housing recovery. Also, don’t forget what the promise of a combined proposed 2.7 million square feet of new convention and trade show space could do for downtown.

The bad news: 30 year mortgage rates have been trending upward as of late, rising to levels last seen in December 2008. President Obama’s housing recovery plan has also been rather inept at solving the rising foreclosure problem and can safely be called a “swing and a miss” at this point. In fact, the HASP program that was reputed to help more than 4 million homeowners refinance their high interest mortgages has helped little more than 50,000 thus far (queue the cheesy 1970’s laugh track).

Nashville single family home market compared to Nashville condo market: This is a hard comparison to make as the downtown condo market is still in its infancy, but here goes: If the overall housing market were a college football game, the single family home market would be in the middle of the third quarter and starting to get tired again. We are hoping that it catches it’s second wind by the time the fourth quarter rolls around, but only time will tell. On the other hand, the Nashville condo price analysis tells me that this market is just finishing up a rather gallant effort in the first half, but is about to walk squarely into a Nick Saban tirade who thinks that being down to Auburn by 7 is death.

The real good news seems to be that things are getting worse at a slower rate than a few months ago. Nationally, consumer spending is up, consumer confidence is up and as a country, we’re gritting our teeth and working through this mess. Don’t forget that what happened after 745 S&L banks failed in the mid to late 1980’s: 5 years of subsequent correction, followed by steady appreciation, followed by what many now call the modern “Gilded Age”.