You Can’t Blame Bush for the Economy

I normally write a very straight forward, non-opinionated blog, but today I digress. I simply cannot take hearing one more person blaming the Bush administration for today’s current economic recession. Yes, the Bush administration did contribute, but the whole chain of events was set in motion by the Clinton administration. In fact, I can tell you that the Clinton administration put us on this collision path with Bank failure on September 30th, 1999. Yes, it was one of those “I’m leaving office, now I am going to make all of my constituents happy” policy changes. It was banking sabotage. It was irresponsible and reprehensible. In an article dated that same day in the NY Times: 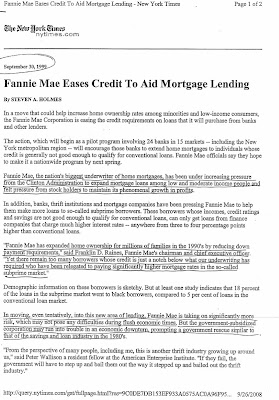 A little research can go a long way… pay very close attention to this part of the article:

“Fannie Mae, the nation’s biggest underwriter of home mortgages, has been under increasing pressure from the Clinton Administration to expand mortgage loans among low and moderate income people…”

And further into the article even predicts exactly was is happening today:

“In moving, even tentatively, into this new era of lending, Fannie Mae is taking on significantly more risk which may not pose any difficulties during economic flush times. But the government subsidized corporate may run into trouble in an economic downtown, prompting a government rescue similar to that of the savings and loan industry in the 1980’s.

So to summarize: Stop blaming the Republicans and the Bush Administration for this Banking collapse. Yes, they do share blame in its magnitude, no they DID NOT cause it. Even us independents who don’t know what they believe are also to blame!