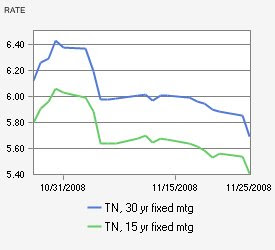 In what was the largest 1 day drop in more than seven years, the average mortgage rate for a 30-year fixed mortgage fell to about 5.50% last night after starting the day at 6.38%.

“The central bank pledged to purchase up to $500 billion in so-called agency debt as well as up to $100 billion in direct debt of Fannie Mae and Freddie Mac, the world’s two largest mortgage buyers, and Federal Home Loan Banks. The announcement was released at 8:15 a.m. New York time yesterday.

The Fed also said it would set up a $200 billion program to support consumer and small-business loans. Together, the programs almost match the $864 billion of U.S. currency in circulation, as reported by the central bank in a Nov. 20 statement.”

It is refreshing to finally see the Fed make a material move that will actually help the Nashville real estate market rather than fundamentally unsound Wall Street companies. Will this change help the commercial market?

It is our opinion that only a trickle down effect will be felt in the Nashville commercial market, there are just too many other deep issues at play.