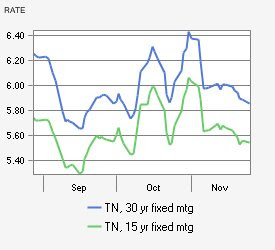 Freddie Mac reports a drop in the 30-year fixed mortgage rate to 6.04% during the week ended Nov. 20 from 6.14% the prior week. During the same period, interest on 15-year fixed loans slipped to 5.73% from 5.81%. Five-year and one-year ARMs declined as well, down to 5.87% from 5.98% and to 5.29% from 5.33%, respectively. “Long and short-term mortgage rates fell for the third consecutive week amid continuing signs of a slowing economy,” said Frank Nothaft, Freddie Mac vice president and chief economist.

Mortgage rates are certainly below the level which normal spurs buyers to begin buying again, but the economy will stop all of those who are not buying out of necessity. We look for rates to continue to soften all the way through the middle of next year. If the economy can even show a glimmer of hope by Spring 2009, there very well could be a mini real estate boom in the Nashville area!

Until then, the Nashville rental market will continue to have its up and its downs as will the real estate auction market.