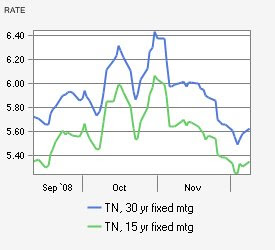 “After Federal Reserve actions to increase liquidity in the mortgage market, interest rates for fixed-rate mortgages (FRMs) took a dive,” said Frank Nothaft, Freddie Mac vice president and chief economist. “This week’s decline was the largest since the week of November 27th, 1981, and 30-year FRM rates are now almost a full percentage point lower since the last week.

At some point all of these rate changes are bound to affect the Nashville real estate market in a positive and substantial way. It just might take until next year to be able to accurately measure the results.